Video games have grown and evolved quite a bit since Pong. They have gone from arcades, to home televisions, and visual graphics have gone from blocky figures to so realistic that they almost look like real people. Our modern games now give us options. We can make our own decisions that completely change the ending, and the story of the game. But what I think makes these games what they are, and have the impact that they do, is the characters. Through the years, gamers have met and encountered a countless number of video game characters, all with their own personalities and backstories. Today, we are focusing on the ladies. Here are the VOTED top 5 best female game characters of all time.

Jill Valentine first made her appearance in 1996 as one of the protagonists of the game Resident Evil. She is a member of a special police unit called STARS. Jill went on to appear in multiple sequels, and remains to this day, a cult favorite.

Zelda has got to be one of the most famous female video game characters ever, and her game, The Legend of Zelda is just as known. While her character’s role is somewhat known for being the “damsel in distress,” she overcame this and helped to defeat the evil Ganon. You don’t have to be a gamer to know who Zelda is, but be warned, confusing her name with the name of the main character, Link, is an unforgivable sin in the gamer world.

First appearing in 1992, Chun-Li is a character from the very popular Street Fighter series. Chun-Li was the first female fighter of any fighting game franchise, which obviously reserves her spot on the list.

Samus is the protagonist of the game Metroid. She is an ex-soldier of the Galactic Federation who became a bounty hunter. Samus was shroud in mystery though. Players were unable to see her appearance, or even know that she was a woman because of her powered exoskeleton suit.  It wasn’t until the end of the game that her identity was revealed, shocking players when they found out that the character they had been playing this entire time, was actually a female.

For those of us that were around to enjoy the original Playstation days, Miss Lara Croft was, and remains, an icon. Lara Croft is the main character of the game, “Tomb Raider.” For some of us, she may have even been our first crush. Whether is was love, lust, or awe, we all have been captivated by Lara. In my opinion, she was Angelina Jolie before Angelina Jolie.

These ladies are the whole package. Beauty, brawn, brains, and sass. These are the women who have made history in the video game community. They have broken the standard that women always need saving, and have helped make the game world what it is today. We are all very fortunate to have them. 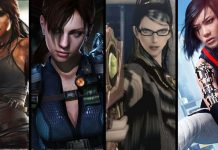