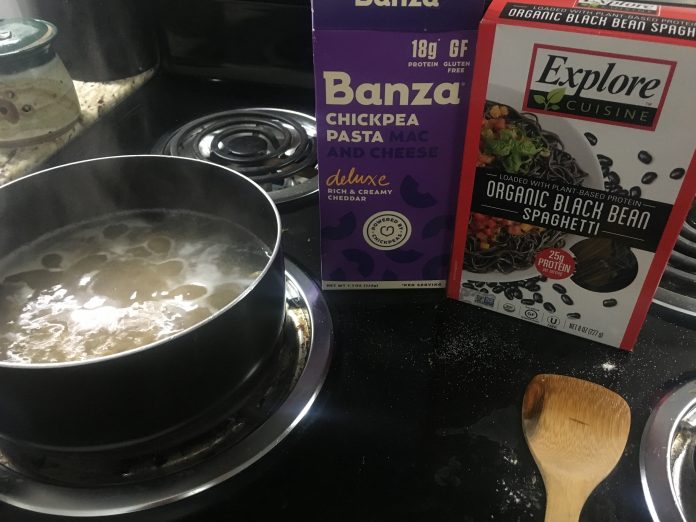 There’s a new trend sweeping supermarkets’ shelves: legume-based pasta. A legume is food-substance that is normally characterized as a seed or  pod. A few of the most well-known legumes include peas, beans, and peanuts. Because legumes do not contain gluten, they are a popular choice for people who are gluten intolerant or have celiac disease.

I am a traditional Italian woman who grew up eating homemade pasta every Sunday. Pasta is one of my guilty pleasures, so I’ve been searching for a healthier option.

I’ve put two types of legume pastas to the test. I picked up both of my boxes of pasta at Wegmans. However, similar varieties of legume pasta are available at other major grocery store chains. Up first: Banza, ‘chickpea’ mac and cheese.

According to its label, the chickpea pasta contains five more grams of protein than traditional mac and cheese. The packaging states it has five more grams of fiber and 20 fewer carbs than traditional pasta. These qualities make this pasta option into one that may be worthwhile for many who are looking for a healthier alternative to traditional pastas on the market. As for the cooking quality, the chickpea pasta cooks just like regular noodles; boil water, add salt, add noodles, cook for five to six minutes, drain, and add cheese. It’s that simple!

I taste-tested some of the noodles before adding the cheese.  I determined that the texture of this pasta is very similar to regular pasta, though it lacks the exact taste of a noodle. Once I added the cheese, it was nearly impossible for me to tell the difference between chickpea mac and cheese and traditional mac and cheese. Additionally, for those who have children who may be picky eaters, this pasta may be a great option because it is so difficult to tell the differentiate this pasta from traditional noodles.

Up next, I tried Explore Cuisine, black bean spaghetti. Right now, its website is offering a $1-off coupon if register to the company’s mailing list. The registration process requires that you supply your email.  While I did not try this pasta yet, I am sure that it will be something to rave about, especially when I use my homemade sauce. Those who grow to love non-traditional pasta and potentially this brand as a go-to potion will find that it has a wide variety of other pasta options available, including pasta made out of edamame, lentil, and more.

The black bean pasta cooked very quickly. One bite and I could tell by the texture and taste this wasn’t flour based pasta, but it still tasted very good. I really enjoyed this pasta. I liked it so much I made enough for dinner and lunch the next day. For dinner I poured the red sauce over the pasta and it hit the pasta spot. For lunch I warmed the noodles up added a little butter and parmigiana cheese. It was delicious. Picky eaters may be able to spot the difference here that chickpea pasta but the taste is great!

If you are still looking for healthy options, spaghetti squash is an all time favorite of mine. The squash takes some time to prepare as you have to half the squash, clean out the guys and seeds (similar to a pumpkin) and often times bake for 40-50 minutes depending on size. From there you scoop the insides out with a fork and the squad looks like long pasta noodles.

Now if you just can’t shake the desire for flour-made noodles, indulge! But try as sneak some veggies (mushroom, peppers, tomato, broccoli, onion and more) into whatever sauce you are using!

Enjoy and if you have a favorite alternative to pasta, feel free to contact me.

Lauren
Lauren H. is a 30-something storyteller. From blogging to her full-time job as a TV news anchor, Lauren has flair for writing and passion for telling meaningful stories. While she isn’t busy in the studio or blogging, you can catch Lauren teaching spin classes, reading the latest thriller, experimenting with a new recipe or unwinding on her couch with her fluffy, gray, calico cat. Lauren is excited to contribute to The Classy Housewife while writing for her blog Pretty In Pa.

I got married in July 2018, but we were not rich. In November, I gave birth to a bouncing baby boy! As...
Read more
Diet Tips

Have you ever found yourself rotating the same recipes because you can't seem to find sufficient sources of protein? Well, you’re not the only...
Read more
Diet Tips

The Real Truth about the Keto Diet

The Keto diet has been all the rage across the U.S. The most googled diet of 2018 has many celebrity spokespeople, including Halle Berry and Kim...
Read more