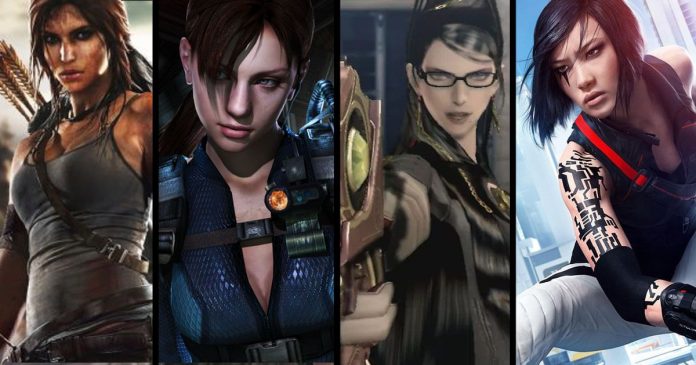 Let’s get real here. Most video game are made by men and have male leads but you can now find more women gamers and programmers than ever before, so why not a list of the top female lead characters in video games. If you look at 20 different list, you will have several very similar games but in a different order. These ladies are strong, assertive, confident, striking, exuberant, and most immortalized characters I could find. My list is greatly bias to the men in my life who are devoted self-proclaimed gamers, my spouse, my brother and not my sons. Do you agree with my list?

While the princess isn’t one of the strongest characters, she is one of the longest running ones. Her tendency to play the victim and wait for her rescuer may have worked in the 1980’s, but in today’s world, that wasn’t going to cut it. In Super Mario Odyssey, she finally shows Bowser who is boss and Mario that she can stand on her own merit and doesn’t need a man to save her. It was a long awaited rise to the top for this girl who played Mario Bros. when it first came out!

While Lightning, aka Claire Farron, didn’t start out as a main character, she returned as the absolute boss in Final Fantasy XIII : Lightning Returns. This action role playing game will have you putting yourself in her shoes in your wildest dreams. Lightning Returns employs a highly revamped version of the gameplay system from the previous two games.

Anyone who follows the legendary Mortal Kombat series (which also became a movie) knows who Kitana is. Princess Kitana made her debut in Mortal Kombat II and captured fans’ hearts with her amazing outfit, reminiscent of the awesome outfits the bad guys wore in John Carpenter’s Big Trouble in Little China, and wicked fighting skills, per List25

While I have not physically played this one the trailers to the game are frightening. The reviews are great and the highly anticipated follow up film Silent Hill: Revolution was released and did well with genre critics. According to CNET  Heather is “The first female — and teenager — to lead the horror franchise.”

This determined courier from the first-person action-adventure game is probably the most ‘real life’ in a video game non-fantasy type badass women characters. She’s athletic and even though she started out as a thief she joined the good guys and now serves as a “Runner” who helps to keep law and order.

Again you couldn’t have a top female protagonist list without having this bomb expert and survivor Jill Valentine. My husband would have disowned me! Wibbu says “We believe a strong female character needs an individual set of skills and a strong sense of identity and purpose.”

I love the male lead character Drake (sidebar… Actor Nathan Fillion should totally play Drake in the rumored movie!) but after multiple games, the storyline began to drag, so I was excited when the fan favorite female character Chloe Frazer took center stage with Uncharted: Lost Legacy’s and along for the ride was also character Nadine Ross. Who doesn’t wish they could climb, treasure hunt, and kick but all while looking fabulous like this chick?

While I am not a fan of this movie or game, you couldn’t have a top female lead character list without Lara Croft. The game dialog and writing leaves much to be desired and I feel exploits the fact women are more emotional than men but when you get down to it, Lara is an incredible female character. The previous games had her so scantily dressed with boobs hanging out, for most female players it was a turn off, but in this newer version it has been toned down and made the list. She also grows as a character and leaves players wanting more.

This one is my personal favorite! The ultimate navigation of an apocalyptic world, I was hooked from the moment the game began. I am on pins and needles waiting for the sequel The Last of Us II she will be the main focus. Ellie is not a 14 yr old damsel in distress, she can protect herself. Her co-lead Joel is a lone wolf who dedicates himself to getting Ellie where she needs to go at all cost. Ellie’s story can be a tear jerker as she navigates her way through survivor’s guilt, but she is quick-witted and will win the day.

Hands down, Aloy is the best female character to date. My spouse plays this game, my son loves it, their friends both male and female alike! I asked 20 ‘gamers’ and 19 agreed. Per THEGAMER “This young, clever, strong, charming, resourceful, beautiful, and tenacious woman is the epitome of modern female gaming protagonists…” I actually enjoy watching someone else play this game. If I am reading or working on another project in the room, I am distracted by this one, while most other games I can tune out. The story line is intriguing and the character is interesting.

Sarah Holland
I am a mother of 4 with my husband of over 10 years. Life is busy, but I work hard to enjoy life to the fullest! Life experience is the best education in my book!

Female gamers are all the rage as old stereotypes fall away and new cultural norms are established. It serves to follow that as female...
Read more
Gaming

5 of the Best Female Game Characters

Video games have grown and evolved quite a bit since Pong. They have gone from arcades, to home televisions, and visual graphics have gone...
Read more