Is your wine killing you? It just might be, depending on the wine. In a lawsuit that was filed in California on Thursday, an independent wine testing lab in Denver has discovered that many wines have up to 5 times the amount of arsenic that the EPA has determined is safe.

According to CBS News, the lab took its findings to the EPA after the wine companies themselves  wouldn’t give the lab the time of day. The lab, BeverageGrades, a company which analyzes wines, discovered after testing some 1300 bottles of California wines that many had somewhere between three and  five times the the amount of arsenic that is legal in water in the U.S. . The legal limit of arsenic in drinking water is 10 parts per billion, and some of the wines contained up to 50 parts per billion.50 parts per billion doesn’t seem like a lot, but we are talking about something that  builds up slowly over time and can kill you. For the sake of full disclosure, Canada’s arsenic rule is 100 parts per billion.  The study also determined that the cheaper the wine (including 2 Buck Chuck, White Zinfandel), the more arsenic it contained. The pricier the wine, the less arsenic.

So why should you worry? First of all, arsenic can kill you over time. It is a known carcinogen, as in, it causes cancer. It is one of the reasons cigarettes contain warnings. Arsenic can build up in your system, and when enough has built up, you can become ill. It is considered, chemically as a “heavy metal” like lead, Symptoms associated with arsenic poisoning can include nausea and vomiting (No, drinking 3 bottles in one night doesn’t mean you have arsenic poisoning, it means you’re stupid and shouldn’t drink, and you have a massive hangover), diarrhea, darkened urine, cardiac (heart) problems, dizziness, shock and even death.

The problem is, that arsenic builds up slowly over time, decades. You may not experience any of the above symptoms, which are more associated with acute arsenic poisoning, like ingesting weed killer.  You may however end up with bladder, kidney, lung or skin cancer.   Long-term exposure to arsenic, in levels lower than toxic, can lead to skin darkening, discoloring, swelling  and hyperkeratosis  (skin bumps that resemble warts/lumps). White lines  might appear in the fingernails.

This article is not to scare you off your vino, but to suggest you go for a better brand, considering the wine companies are sticking their heads in the sand on the risks to consumers.  Hopefully the lawsuit will force some legislation on the standards used in wine production. 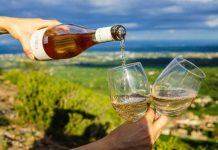 Choosing Wine Doesn’t Have To Be A Worry, Even For Beginners

Cheap Wines Under $20 That Taste Expensive